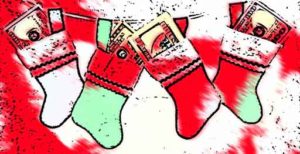 The most popular legend about why stockings are hung at Christmas goes something like this:

A recently widowed man and father of three girls was having a tough time making ends meet. Even though his daughters were beautiful, he worried that their impoverished status would make it impossible for them to marry.

St. Nicholas was wandering through the town where the man lived and heard villagers discussing the family’s plight. He wanted to help but knew that the man would refuse any kind of charity directly. Instead, one night, he slid down the chimney of the family’s house and filled the girls’ recently laundered stockings, which happened to be drying by the fire, with gold coins. And then he disappeared.

The girls awoke in the morning, overjoyed upon discovering the bounty. Because of St. Nicholas’ generosity, the daughters were now eligible to wed and their father could rest easy that they wouldn’t fall into lonely despair. Whew! While obviously far-fetched, this tale of unknown origin and date is most widely referenced when it comes to the history of the Christmas stocking.

If you celebrate Christmas, what’s your stocking of choice? A tube sock, a silk stocking, the traditional red and white variety, or something else completely different?

This site uses functional cookies and external scripts to improve your experience.

NOTE: These settings will only apply to the browser and device you are currently using.

We use cookies to ensure that we give you the best experience on our website. If you continue to use this site we will assume that you are happy with it.OkPrivacy policy